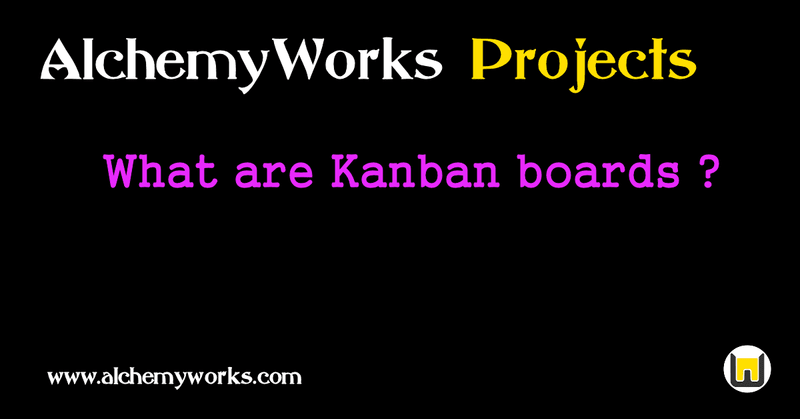 What is Kanban project management ?

Kanban boards are a tool that is often used to manage projects or tasks that have a repetitive or similar nature.

They originated in manufacturing and service processes, taking the form of an actual board where cards representing the work being done are moved from one column to another as each stage of the work is completed. Toyota pioneered this in the 1940s and 1950s in their production lines; Kanban derives from the Japanese for visual signal or card. The technique gives a highly visual representation of workflow, job progress, capacity and performance.

Modern Kanban project management is electronic in nature, but the principles, nature and purpose are much the same. Jobs transition through a number of states through to completion, represented by columns of work. An example for a repair activity might be; Recorded, Assigned, In Progress, Completed, Invoiced.

In AlchemyWorks Projects, Kanban boards are defined under the project menu, and an arbitrary number of boards can be created, with a user defined set of project status codes, or transitions.

Projects can be dragged from one column to another as a quick way to change project status.

AlchemyWorks Projects encourages the use of different status codes for different types of project, and their progression states. This promotes easier navigation through the system as well as better and more flexible reporting. The number of projects or tasks at a particular status can be seen and linked to from the status list screens, and also reported through the project sieve mechanism - even if these states are not included within a Kanban board.

It is also a good idea to create workflow rules to manage a progression, as this facilitates the flow of tasks with appropriate on-screen controls. Kanban boards don't require that the status codes listed are part of a workflow, but it usually makes sense for them to be.