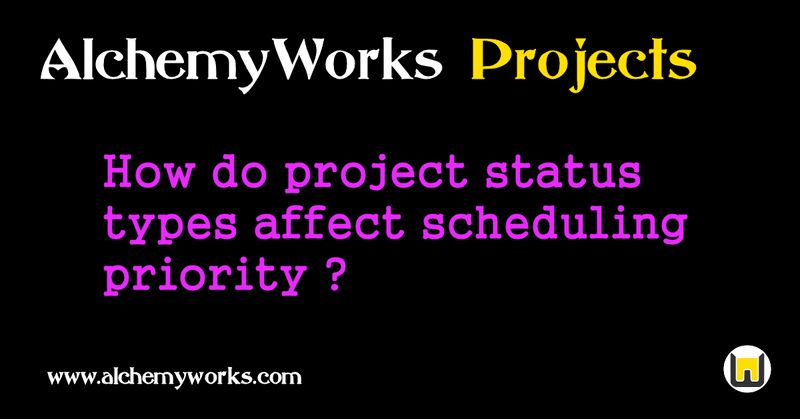 Project status code types affect the projects to which they are applied, in particular the scheduling behaviour. The following project status types are available :-

Active - Active projects are shown in the user home lists (if not limited by dependencies or time constraints), and are dynamically scheduled in the owner's calendar (unless set with a fixed start and end time). Scheduling takes account of any project dependencies, or constraints such as a deferral time, then allocates according to priority.

Planning - Planned projects are also scheduled, but only after all active projects have been allocated. Planned projects appear in the project sub-tasks, and in the user home lists. This type of status is useful for projects we likely intend to do, but have not yet been confirmed or approved. The planning attribute is inherited, so all subsidiary projects and tasks will be scheduled as if they are of this status type.

Frozen - Frozen projects are similar to planned projects, but are not scheduled. For example, the project may have been put on hold or cancelled. The frozen attribute is also inherited, so subsidiary projects and tasks will not be dynamically scheduled. Frozen projects which have fixed start and end times will remain in the calendar.

Complete - Completed projects are still visible in sub-task lists, but no longer scheduled. When setting an active project to completed status, the remaining work value will be cleared.

Meeting - Meeting is a special kind of project that is scheduled for all project members, subject to time constraints such as deferral, and where it does not collide with any fixed assignments in member diaries. Setting respawn on a meeting is a convenient way of arranging a recurring project review. Meetings are not shown by default in the sub-task list, unless viewing explicitely by status type, however they are always visible under the resources tab. You can create a meeting by changing a project status to one of type meeting, but it is easier to create under resources, which will only prompt for applicable status codes, and automatically inherit current project workers.

Template - Setting a project status to one of type template will convert the entire sub-tree below it to a template, and enable an instantiation option to clone the structure into a new project. Any projects which have been converted to templates will show in the templates list under the projects menu.

Archive - Archived projects are similar to completed, but do not show by default in project sub-task lists. They can be viewed by explicitly selecting a filter on that status in the project task list console, by drilling into status maintenace lists, or by navigating the project sieve page.